I have not had much time to sew lately but by squeezing in an hour here and there I have managed  to sew two versions of McCalls  6696, the first as a wearable muslin,  I made no alterations to the pattern.  The only  thing I am not happy about is the neck, which is too big, when taking  body measurements I never thought about measuring my neck, turns out my neck is 4 cm smaller than my dress forms smallest size!

For version two I reduced the neck but its still a little too big, so if I make this again I will reduce the neck a little more.  Many bloggers have mentioned the “poofy”  back of the bodice,  for the second version I reduced the amount of fabric to be gathered to eliminate a lot of the poofyness, but keeping the essence of the design.

Dress number 2 went together reasonably well until I attempted a buttonhole, I have made quite a few  shirts recently  and dress number 1 with no buttonhole issues at all.    As I always do I tested the buttonhole on a scraps of fabric, two layers and and the interfacing and the button holes were fine.  As soon as I started on the dress the machine would stitch the left had side of the button hole and just continue to stitch in the same place and not make the right hand side of the buttonhole, unpicking a button hole is a nightmare, apart from the damage to the fabric.   After a lot of swearing, moaning and more swearing  I went to bed in a very bad mood.

Having given it some thought the only thing I could think was maybe it was the thickness of the band was causing a problem, although it didn’t feel bulky.  So after some unpicking, trimming, layering and restitching I was ready to try again.    With some trepidation  I attempted to make the first buttonhole, at last success!!

I love this pattern and  the result is an easy to wear, versatile dress.

Think I am going to have a rest from collars and buttonholes for a while!

View all posts by Trisha 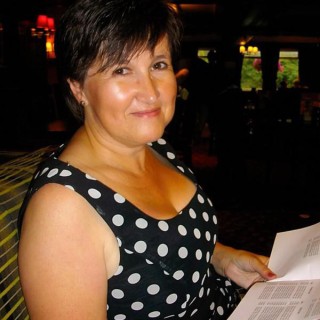